The second reason is a friend who moved recently gave me two beautiful Egyptian cotton flat sheets. I don’t use flat sheets much. This fabric was too lovely to leave in a cupboard. So I sewed them together and made a home made duvet cover. Easy peasy.

Make sure your two sheets are big enough to fit your duvet size. You can pretend to buy a duvet cover on-line and get the dimensions for a standard duvet. Or measure your duvet. These sheets were long enough – but too short on the one side. I had to snip fabric from one end and sew it on the side. Not ideal. Hopefully you won’t have to do this. I really wanted this home made duvet cover. Don’t you love the colour?

I snipped a strip from the bottom

And sewed it to the side

Now that the proportions for my duvet were right, I lay it flat and lined up the two pieces. Then pinned them in place. Make sure you use a flat surface, ensure the fabric is flat and not puckering or warped.

Pin two pieces together and pin in place

You’re not going to sew buttons or press studs to your home made duvet cover. You will leave a small gap open to insert your duvet. So make sure you use the nicest hem for that section.

Fold the duvet in half and allow about 60 centimetres in the middle – 30 centimetres to each side – of the centre fold. Do not sew there. Leave that open.

Sew all around duvet cover

This is a mighty big item so you need space to be able to sew all around or it will tug at your sewing machine.

And that’s it. Duvet cover done. You can also buy sheeting fabric and make a duvet cover. You could make a colour block home made duvet cover using two different colour pieces of fabric? Just be sure to factor in seam allowances. 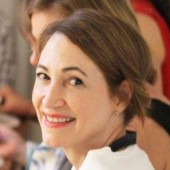 My name is Karen. I live in Cape Town, South Africa. This blog is about how to make your own, how to recycle, restyle and up-cycle.

How to make an easy hairband